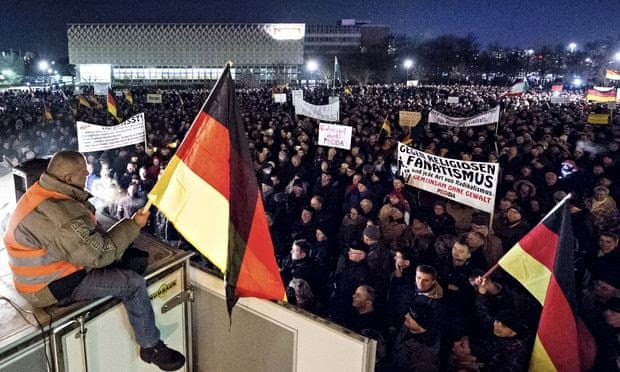 Its members have been dubbed the “pinstriped Nazis” and they refer to their demonstrations as “evening strolls” through German cities. But on Monday night, an estimated 15,000 people joined Pegida, or Patriotic Europeans Against Islamisation of the West, in a march through Dresden carrying banners bearing slogans such as “Zero tolerance towards criminal asylum seekers”, “Protect our homeland” and “Stop the Islamisation”.

Lutz Bachmann, the head of Pegida, a nascent anti-foreigner campaign group, led the crowds, either waving or draped in German flags, in barking chants of “Wir sind das Volk”, or “We are the people”, the slogan adopted by protesters in the historic “Monday demonstrations” against the East German government in the runup to the fall of the Berlin Wall.


More @ The Guardian
Posted by Brock Townsend at Tuesday, December 16, 2014