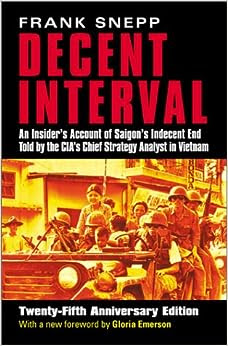 The first great book on Vietnam.

From time to time I stopped by the CIA operations room to listen in horror at the radios as stranded Vietnamese agents pleaded over the circuits for help, begging not to be forgotten. Some would be picked up by Air America helicopters that CIA colleagues and I sent shuttling around the city. Most would be forgotten.

At one point a Vietnamese woman who had borne a child she said was my own called to say she would kill herself and the boy if I couldn’t rescue them. I told her to call back in an hour — I’d help her then. But when she called back I was downstairs briefing the Ambassador on another useless piece of intelligence, and she made good on her promise, adding two more deaths to those already weighing on my conscience.

When my time came to leave that night, with the last CIA contingent in the Embassy, we had to push Vietnamese out of the way in the halls to get to the chopper on the roof. I couldn’t look into their eyes.

Retreat is the most difficult of all military operations. But as a matter of honor you do not leave friends on the battlefield. In the evacuation of Saigon over half of the Vietnamese who finally got out escaped on their own with no help from us until they were far at sea.

The last CIA message from the Embassy declared: Let’s hope we do not repeat history. This is Saigon station signing off.

Similarly, while giving Kissinger an unchallenged opportunity to speak his mind, she ignored the fact that what he said on camera about trying to negotiate a two-Vietnam stalemate as part of the Paris accords was at odds with now declassified Nixon White House tapes.

In these recordings Kissinger can be heard declaring cynically that he was hoping simply to preserve the Saigon regime through the next U.S. election cycle and then meant to blame South Vietnam’s collapse on its own incompetence.