Via comment by Cav Med on "If the government will not resist invasion, the p...
The f------ nerve: For those who cannot see that this is directly connected to the illegal immigration crisis of our Republic, you are hopelessly lost.

“In this Europe, animals are sleeping in beds and we sleep in the rain,” said 23-year-old Syrian woman Fatima Hamido after running across the border. “I was freezing for four days in the rain, with nothing to eat.” 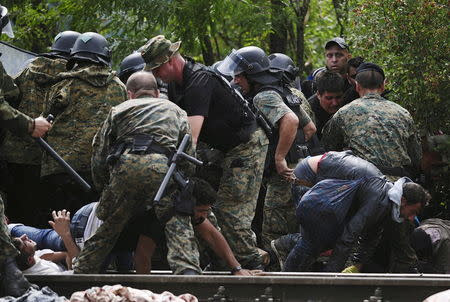 GEVGELIJA, Macedonia (Reuters) - Thousands of migrants stormed across Macedonia's border on Saturday, overwhelming security forces who threw stun grenades and lashed out with batons before apparently abandoning a bid to stem their flow through the Balkans to western Europe.

Some had spent days in the open with little or no food or water after Macedonia on Thursday declared a state of emergency and sealed its borders to migrants, many of them refugees from war in Syria and other conflicts in the Middle East.