People Along the Way: Dan Smoot 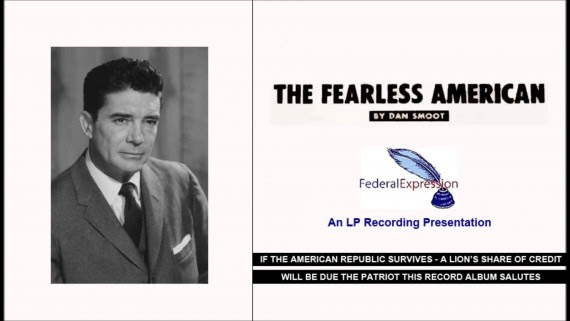 Dan Smoot never considered himself to be a Southern conservative, though he was born and reared in Missouri and spent his early adult life in Texas.  He was one of the leading conservative voices in the 1960s and hosted a weekly television program titled “The Dan Smoot Report.”

There were once principled men who were willing to carry the conservative standard against seemingly insurmountable odds, even if it meant public ridicule.  Smoot was one of those men, and his brand of conservatism was heavily influenced by his time in the South.  The giants of conservatism in the post-World War II era–Russell Kirk, Richard Weaver, Henry Regnery, James Kilpatrick, Mel Bradford, et. al.,–understood that much of American conservatism was nurtured in the soil of the South, a region that was slow to adopt the consumerism and multi-nationalism of the mainstream Republican Party.

Country club Republicans and their neoconservative allies eventually purged these men from respectable public discourse.  America has suffered as a result.

Smoot’s autobiography People Along the Way contains interesting tidbits about life in the Great Depression South, among them the common interaction among white and black Southerners.  These stories would not be considered politically correct, nor would they be presented by the modern historical profession.  They involve everyday white and black Southerners interacting without a hint of racial animosity or spite.