War Against a Free Trade South

It is clear that the withdrawal of the Southern States in early 1861 was caused by Northern hostility, especially with regard to the South’s political conservatism and domestic institutions. More obvious is that secession did not necessitate war, as the North could have let the South form its more perfect union peaceably. The North waged war for economic reasons and to thwart the free trade policies of the new American Confederacy.
Bernhard Thuersam, www.Circa1865.com    The Great American Political Divide 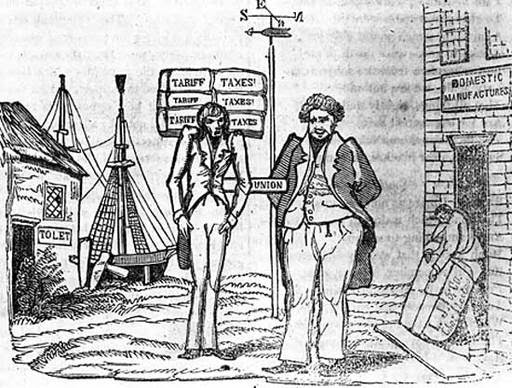 Cartoon drawn during the nullification controversy showing the manufacturing North getting fat at Southern expense.

War Against a Free Trade South

“When the Southern States began to secede after Lincoln’s election, it soon became evident that the great majority of Northerners considered disunion intolerable. Among the reasons, they foresaw disastrous economic consequences; and this explains in part their demand that Lincoln “enforce the laws” in the South. The Boston Herald (November 12, 1860), predicted some of the evils that would result from disunion:

“Should the South succeed in carrying out her designs, she will immediately form commercial alliances with European countries who will readily acquiesce in any arrangement which will help English manufacturing at the expense of New England.

The first move the South would make would impose a heavy tax upon the manufactures of the North, and an export tax upon the cotton used by Northern manufacturers. In this way she would seek to cripple the North. The carrying trade, which is now done by American {Northern] vessels, would be transferred to British ships, which would be a heavy blow aimed at our commerce.

It will also seriously affect our shoe trade and the manufacture of ready-made clothing, while it would derange the monetary affairs of the country.”

“It does not require extraordinary sagacity to perceive that trade is perhaps the controlling motive operating to prevent the return of the seceding States to the Union, which they have abandoned. Alleged grievances in regard to slavery were originally the causes for the separation of the cotton States; but the mask has been thrown off, and it is apparent that the people of the principal seceding States are now for commercial independence.

They dream that the centres of traffic can be changed from Northern to Southern ports. The merchants of New Orleans, Charleston and Savannah are possessed with the idea that New York, Boston and Philadelphia may be shorn, in the future, of their mercantile greatness, by a revenue system verging upon free trade. If the Southern Confederation is allowed to carry out a policy by which only a nominal duty is laid upon imports, no doubt the business of the chief Northern cities will be seriously injured thereby.

The difference is so great between the tariff of the Union and that of the Confederated States, that the entire Northwest must find it to their advantage to purchase their imported goods at New Orleans rather than at New York. In addition to this, the manufacturing interest of the country will suffer from the increased importations resulting from the low duties . . . The . . . [government] would be false to all of its obligations, if this state of things were not provided against.”