Breitbart News is Censoring Americans Who Oppose Amnesty for Illegals 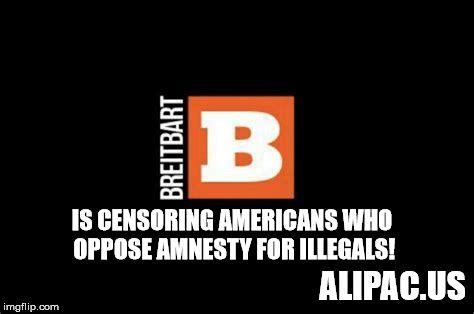 Americans for Legal Immigration PAC is sounding the alarm that Breitbart News is censoring voices that oppose Amnesty for illegal immigrants or criticize Trump's reversals on Amnesty in an effort to support the Trump backed Amnesty bill sponsored by Rep. Goodlatte (HR 4760: Securing America's Future Act).

While HR 4760 promises conservative voters many things they want to hear about building a wall and reducing legal immigration levels, the core mission of the legislation is to get through an Amnesty for a minimum of 800,000 illegal aliens currently given immunity from existing immigration laws by Obama's and Trump's illegal and unconstitutional DACA orders. ALIPAC defeated Senator Dick Durbin's Dream Act bill in the US Senate in December of 2010 by releasing a hidden clause within the bill that would allow DHS to waive all Amnesty limits and immigration enforcement promises.

DACA Amnesty, or Deferred Action for Childhood Arrivals, is blatantly unconstitutional because it is the same Dream Act legislation that groups like ALIPAC have successfully defeated in Congress made into policy through Presidential memos.