Ayotte a no on Manchin-Toomey; Update: Reid announces support for Feinstein assault-weapons ban; Update: Heitkamp a no, too 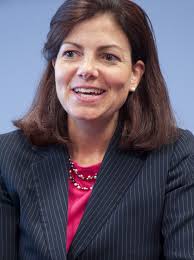 This is a big deal, and not just because of the swing of a single vote in the Senate:


“Last week, I voted to initiate Senate debate on preventing violence and protecting the Second Amendment rights of law-abiding Americans. Several proposals have been brought forward, and I’ve been carefully reviewing them all.

“There are responsible steps that can be taken to stop criminals and others who are already prohibited from possessing firearms under federal law from obtaining them. With those principles as a guide, I am cosponsoring the Protecting Communities and Preserving the Second Amendment Act, which includes needed reforms to the National Instant Criminal Background Check System, addresses mental health gaps in the criminal justice system, and criminalizes gun trafficking and straw purchases.

“To further address the need to improve the nation’s mental health system, I also am co-sponsoring the Mental Health Awareness and Improvement Act. This bipartisan measure includes provisions of legislation I helped introduce that seek to improve mental health first aid training and increase the effectiveness of mental health care across the nation.

“I believe that restricting the rights of law-abiding gun owners will not prevent a deranged individual or criminal from obtaining and misusing firearms to commit violence. While steps must be taken to improve the existing background check system, I will not support the Manchin-Toomey legislation, which I believe would place unnecessary burdens on law-abiding gun owners and allow for potential overreach by the federal government into private gun sales.”

Presumably, Joe Manchin already knew this when he threw in the towel on his bipartisan compromise with Pat Toomey earlier today, but the announcement all but guarantees the demise of Democratic gun-control proposals scheduled for votes today.  The “defection,” if it can be called that, of a Republican who voted to allow debate on the bill will make it very difficult to convince red-state Democrats like Mark Pryor to support it — especially since it’s clear that it will go down to defeat.  Why risk the ire of 2014 voters just to back a failure?