Has the Gang of 8 been out of the country for 5 years? Their bill tackles the . . . LABOR SHORTAGE? 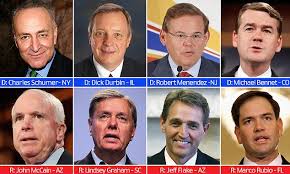 Just how long was the Gang of Eight Senators in that back room pounding out the massive immigration bill they released today?

Supposedly, it has been three months, but  I'm wondering if they've been in that back room for five years and missed the fact that the country during that time lost millions of jobs and the top concerns of voters are putting Americans back to work in an improved economy.

Nearly every section of the Gang Amnesty bill seems to add more foreign workers to compete with unemployed and underemployed Americans. The Gang apparently believes that the way to help the 20 million Americans who can't find a full-time job is to give out another 20-30 million lifetime work permits to foreign citizens over the next decade.

This bill wouldl further flood labor markets at the lower-skill levels where real wages have declined 10% to 22% since 1980.