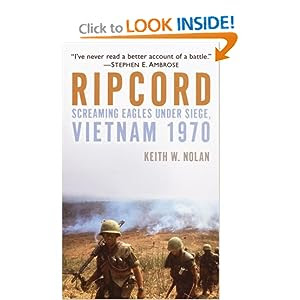 I am about half way through and I agree with Stephen E. Ambrose who stated

Minute to minute action down and dirty fighting against entrenched NVA in underground bunkers which were connected.  The troopers could kill everyone in a bunker and minutes later it would be manned again.  Imagine below.  This happened when the good Captain killed a Chinese advisor 10 feet away who had just thrown a satchel charge at him. His chief complaint, after the satchel charge went off in his face and he later awoke 20 feet away, was that he had lost his shotgun.:)

"That ol' Winchester was a sweet-shootin' gun."

"The adrenaline was such that  Rollison crushed the walnut slide of his shotgun as he pumped off the shots, then, his left hand stinging with splinters.........."

Oct 07, 2012 Darren Burton
This book is one of the very best accounts of combat I have ever read. This book is as good as "We Were Soldiers Once and Young". I wish everyone that has ever been told that "we lost the war in Vietnam because the politicians made us fight it with one had tied behind our back" would read this book. It shows that the war was not lost because of lack of effort on our part. Our soldiers fought bravely and valiantly and their efforts are just now starting to be recognized by the general public.

The North Vietnamese Army were a brave and determined foe and were willing to fight to the last man. When you read about the type of firepower they were willing to wade through and would keep coming at you, you soon realize that they were willing to accept losses that we could not comprehend nor stomach politically. Short of genocide, there was no way for the United States to win the Vietnam war.

This book carries my highest recommendation.

Dec 01, 2012 Mike Kershaw
This is a book I have been giving to battalion commanders enroute to battalion command for the past few years. It is the story of 2-506th and their fight over Firebase RIPCORD late in the Vietnam War, a period characterized by "Vietnamization" and Pacification. This incident was still talked about as sort of a jungle myth as late as the 80's at Fort Campbell by the old timers, the battle saw three of eight rifle companies committed overrun by the NVA, "Hamburger Hill" type casualties (almost 70-80 KIA of which some 17 were MIA for a period) and an evacuation of a Firebase under pressure during which the Battalion Commander (Andre Lucas) would be killed in action and awarded a controversial Medal of Honor. A compelling book and one that should serve as a cautionary tale as our fight shifts in Afghanistan. This book could be read alongside "The 13th Valley" and "Matterhorn" to gain insight into leadership in the closing of difficult campaigns.
Posted by Brock Townsend at Wednesday, April 17, 2013