A few goodies from Ol' Remus 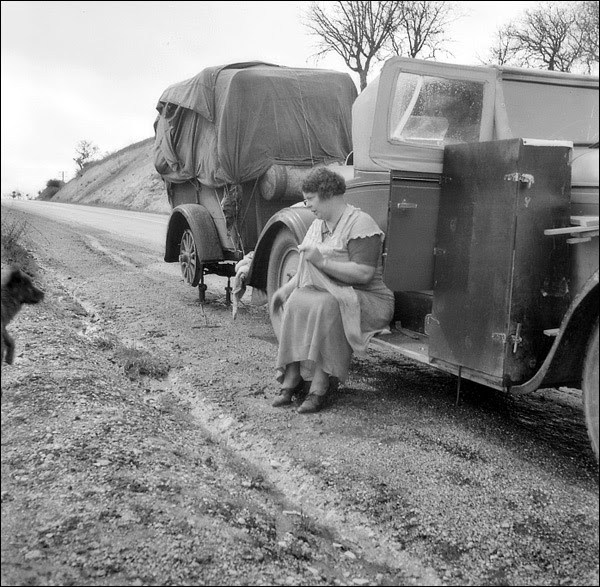 1936. Migrant peafield workers on the road in California.

Migrant field hands typically made *two to two and a half dollars a day, about forty bucks in 2013 dollars. Said another way, a family of four able hands made around eight hundred dollars, equivalent, for five day's work.

The notion that the government is entitled to a certain portion of your wages before you even receive your paycheck is a direct contradiction of the most basic tenet of liberty: private property.  It is no exaggeration to say that once Congress was granted the power to levy an unlimited tax upon incomes, its members assumed the power to render every American under absolute tyranny, says Todd Keister in this article, The IRS: Destroying Liberty Since before You Were Born, at American Thinker.


Bystander in Chief Obama - His brief legislative career was about voting "present" because he prefers to be absent when accountability knocks... He reemerges only after the shooting stops and the smoke clears: gnosis personified, here to diagnose our failings. He is not a commander-in-chief for the battle but the armchair general of the post mortem.
Andrew McCarthy at nationalreview.com

Suddenly, the same mainstream press that for a half-decade had served as Barack Obama’s hagiographers, water carriers, bootlickers, lawn jockeys, shoeshine boys, livery drivers, toadies, stooges, and secret election committee…the same ones who’d dismissed all criticism of their big-eared saint as smelly hillbilly racism…the same ones who’d previously scoffed at the New Black Panthers case, Fast and Furious, and Benghazi as Republican-manufactured piffle…suddenly, it seemed as if Obama had flashed his fangs and bit them on the buttocks, leading them to act like teenage girls whose lover had cheated on them.
Takimag at takimag.com

In the end, the Soviet economy was so utterly fraudulent that the final breakdown of the system came as a complete surprise to many in political and economic fields of the era.  This is what happens when governments control all source data for financial statistics; transparency dies and collapse creeps in.
Brandon Smith at alt-market.com
Posted by Brock Townsend at Monday, May 27, 2013