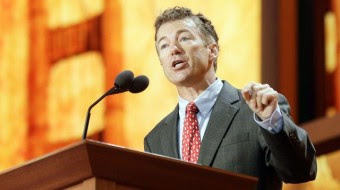 'I don't want them watching us everywhere we are'

Sen. Rand Paul, R-Ky., told radio host Aaron Klein that the Obama administration may have made promises about drones over U.S. soil, but “there still exists a question” on exactly how the White House does plan to use the unmanned, armed vehicles.

“The question is: What happens when you’re not involved in combat, but you’re thought to be conspiring to attack the United States?”

“I personally would prefer a type of scenario where we try people for treason,” Paul suggested.

“There are Americans who have gone to the other side, but so we know that there is a process in place to determine their innocence or guilt, I would try them for treason. If they don’t come home, I would try them in abstentia. But I would have some kind of process other than flash cards and PowerPoint to determine who’s innocent and who’s guilty.”