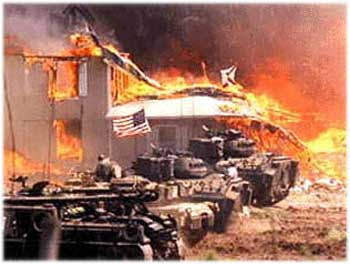 We drove down a quiet country road, trees and green meadows in every direction. Mount Carmel, the famous Branch Davidian Compound, was a sharp turn to the right. Gone was the mailbox at the entrance with Branch Davidian Church clearly written on it in big black letters where the once 100-plus residents of a devout break-off of the Seventh-day Adventist Church received their mail.

Once on the grounds, we were met with two simple memorials each telling us that something very significant and violent had happened here; one to the four ATF agents killed in the February 28, government raid. A few feet away was a shrine of sorts with a name on a plague for each of the 76 Davidians (19 men, 34 women, 23 children) who lost their lives in the fiery furnace in their place of residence 21 years ago, April 19, 1993. Sympathetic visitors had left money on one of the shrines.