Deadliest motorcycle gang in Waco shoot-out was not Bandidos, Cossacks, Scimitars, or Vaqueros. It was police.

Via comment by Anonymous on The Waco Police Massacre? (Worth the read) 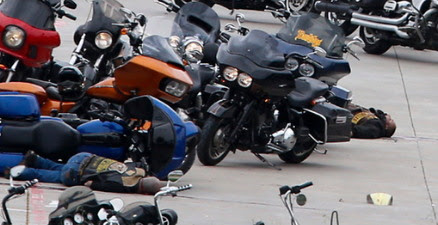 Was the Waco Shoot-out a gunfight between rival gangs or an ambush laid by law enforcement? Police are monopolizing the testimony but the evidence suggests a barroom brawl became a pretext to kill or arrest essentially grassroots organizers, now charged with “organized crime”. Investigators can litter the crime scene with brass-knuckles and knives but the shell casings are going to be police issue.

Motorcycle headlights were on, indicating club members were trying to leave. Police claim that the brawlers redirected their fire toward officers, but did that happen while the bikers were trying to ride off? Because that task requires both hands. This gangland shoot-out has all the subtlety of the St Valentine’s Massacre.