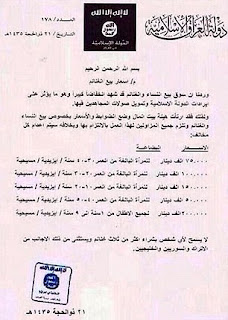 A translated version of the document (above) was shared online by humanitarian and peace prize winner Dr Widad Akrawi, and reads as follows:

We have received news that the demand in Women and Cattle market has sharply decreased and that will affect Islamic State revenues as well as the funding of mujahideen in the battlefield, therefore we have made some changes. Below are the prices for Yazidi and Christian women.

Customers are allowed to purchase only three items with the exception of customers from Turkey, Syria and Gulf countries.

ISIS fanatics have executed 19 women for refusing to have sex with its fighters, a Kurdish official has said.

He claimed the women were being held hostage in Islamic State's stronghold of Mosul, Iraq, which the terror group seized in June last year.

Meanwhile a UN envoy investigating Islamic State's vile sex trade has said 'girls get peddled like barrels of petrol' and one can be bought by six different men.

She also verified a disturbing ISIS document which suggested the extremists sell the Yazidi and Christian women and children they have abducted, with girls aged just one to nine-years-old fetching the most money.

ISIS stormed the Sinjar district in northern Iraq last year and captured hundreds of women belonging to the Yazidi community, who the Islamists view as heretics.