Via John" Crooked Hillary;  her Calumny.    what a disgusting piece of human excrement Hillary is; more will die because of her statement's - just like her ex-boss's statements already have.  they are accomplices to murder.   Hillary says we need to "listen more to black people."

Really, Hillary?  Why?  Why would you further inflame such an explosive situation? Do you hope to exploit it for your personal gain, much as Obama has done for more than seven years and with such obviously disastrous consequences to the national fabric?   Dallas has not even buried its 5 dead white cops, targeted for their skin color alone and there you are,stirring the racial stew like one of MacBeth's crones.

My advice to you, Hillary is that you should visit some of the survivors, in private, and explain to them what you've done to harm them and how you, Hillary, would dare blame these victims of a racial attack on their skin color.

Madame,  you are not fit to be elected dog-catcher in a town without dogs." 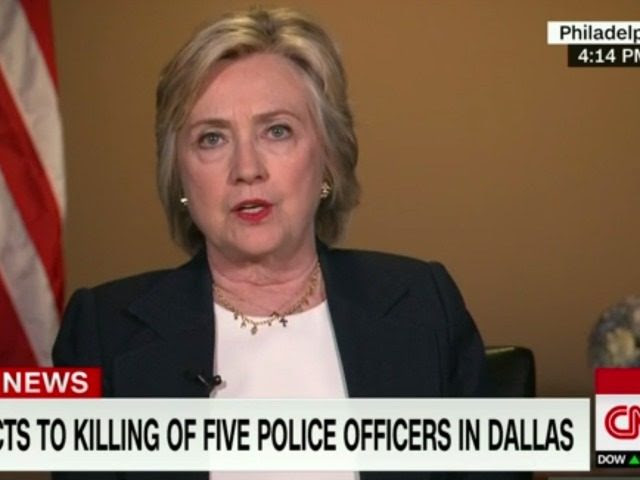 Hillary Clinton used a CNN interview on Friday to completely embrace the Democrats’ claim that white people and cops must change to help reduce the number of African-Americans killed in tense exchanges with cops.

“I will call for white people, like myself, to put ourselves in the shoes of those African-American  families who fear every time their children go somewhere, who have to have ‘The Talk,’ about, you now, how to really protect themselves [from police], when they’re the ones who should be expecting protection from encounters with police,” Clinton told CNN’s Wolf Blitzer.