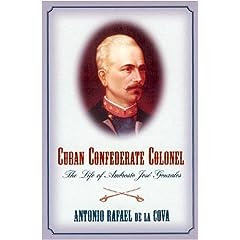 Colonel Ambrosio José Gonzales (1818–1893) - Gonzales, a native Cuban, became a U.S. Citizen in 1849 and settled in Beaufort, South Carolina. Gonzales was active during the bombardment of Fort Sumter and because of his actions was appointed Lt. Colonel of artillery and assigned to duty as Chief of Artillery in the department of South Carolina, Georgia and Florida. Gonzales, who served as a special aide to the governor of South Carolina, submitted plans for the defense of the coastal areas of his homeland state. According to Major D. Leadbetter in a letter to the Secretary of War:

"The project of auxiliary coast defense herewith, as submitted by Col. A. J. Gonzales, though not thought to be everywhere applicable, is believed to be of great value under special circumstances. In the example assumed at Edisto Island, where the movable batteries rest on defensive works and are themselves scarcely exposed to surprise and capture, a rifled 24-pounder, with two small guns, rallying and reconnoitering from each of the fixed batteries, would prove invaluable. A lighter gun than the 24-pounder, and quite as efficient, might be devised for such service, but this is probably the best now available. Colonel Gonzales’ proposed arrangements for re-enforcing certain exposed and threatened maritime Posts seem to be judicious and to merit attention."

Gonzales was able to fend off Union gunboat attempts to destroy railroads and other important points on the Carolina coast by placing his heavy artillery on special carriages for increased mobility. On November 30, 1864, Gonzales served as Artillery Commander at the Battle of Honey Hill. The Battle of Honey Hill was the third battle of Sherman's March to the Sea fought in Savannah, Georgia.[29] Confederate President Jefferson Davis declined Gonzales's request for promotion to general six times. Davis' dislike for P. G. T. Beauregard deprived Gonzales of general's rank because he (Gonzales) had served under him. It is also believed that Gonzales's experience with Cuban filibusters, was no recommendation for command, nor were his contentious relationships with Confederate officers in Richmond.
Posted by Brock Townsend at Wednesday, April 24, 2013