Judge to Janet Napolitano: You have to deport illegal immigrants 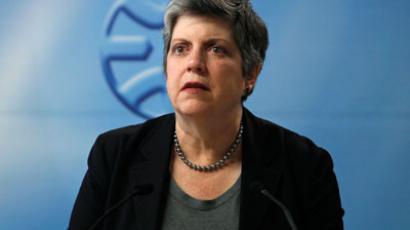 Department of Homeland Security Secretary Janet Napolitano does not have the authority to refuse to enforce laws that require illegal immigrants to face deportation, according to the federal judge hearing the Immigration and Customs Enforcement union’s lawsuit against DHS.

“The court finds that DHS does not have discretion to refuse to initiate removal proceedings [when the law requires it],” U.S. District Judge Reed O’Connor said Wednesday, per Business Week.

O’Connor asked DHS and the ICE union to offer additional arguments before he makes a final ruling on the legality of President Obama’s “deferred action on childhood arrivals” program, which invoked prosecutorial discretion as a means of allowing people to stay in the country if they would have qualified for amnesty under the Dream Act, which never passed Congress.

The judge’s comments come one day after Napolitano scolded the union, during a Senate Judiciary Committee hearing on the Gang of Eight’s immigration bill, for challenging the policy she and Obama have implemented.

“There are tensions with union leadership, unfortunately,” Napolitano told Sen. Jeff Sessions, R-Ala., on Tuesday. “Here’s what I expect as a former prosecutor and attorney general: that is that law enforcement agents will enforce the law in accordance with the guidance they are given [by] their superiors.”

Sessions faulted Napolitano for refusing to meet with the ICE officers’ union. “I have never heard of a situation in which a group of law officers sued their supervisor, and you, for blocking them from following the law,” he said. “They weren’t complaining about pay, benefits, working conditions — they were saying their very oath they took to enforce the law is being blocked by rules and regulations and policies established from on high, and that this is undermining their ability to do what they are sworn to do.”