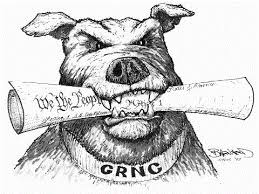 After lengthy debate and after rejecting numerous anti-gun amendments, the NC House Judiciary A Committee today passed House Bill 937. The bill will now head to the House floor for a vote, likely next week.

HB 937 would also clean up flaws in the parks carry language passed in HB 650 under which municipalities continue to flout the law by banning guns in entire parks.

Sponsors Jacqueline Schaffer (R-Mecklenburg, ****), Justin Burr (R-Montgomery, Stanly, ****), John Faircloth (R-Guilford, ****), and George Cleveland (R-Onslow, ****) did an outstanding job of defending the bill. Addressing the committee in favor of the bill were GRNC president Paul Valone, Director of Development Josette Chmiel, and representatives for the NRA and NCRPA.

In testifying against the bill, North Carolinians "Against Gun Violence" director Gail Neely perjured herself to the committee by regurgitating a study which she claimed dealt with concealed handgun permit-holders, despite the fact that Valone had two weeks ago produced a copy of the study for her (and audience of an ACLU forum) demonstrating clearly that her claims were false.

Stay tuned for a detailed accounting of the committee action, including video.