The Issue for Which We Fought 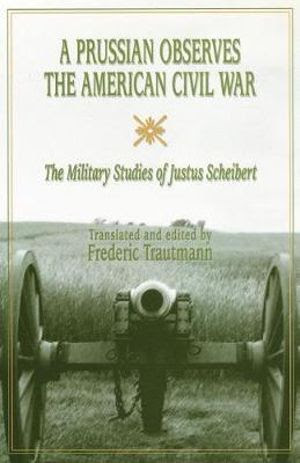 Five years after meeting President Davis in Richmond as a Prussian military observer, Captain Justus Scheibert revealed in his just-published account of seven months in the Confederacy: "The fact that an uncritical, partisan madness now besmirches his character . . . cannot rob him of the place in history, which will be given him when calm reason stands in judgment over blind confusion."
Bernhard Thuersam, Chairman
North Carolina War Between the States Sesquicentennial Commission
"Unsurpassed Valor, Courage and Devotion to Liberty"
www.ncwbts150.com
"The Official Website of the North Carolina WBTS Sesquicentennial"

The Issue for Which We Fought

“That we should dare to resort to arms for the preservation of our rights, and “to secure the blessings of liberty to ourselves and our posterity,” was regarded by our enemies as most improbable.

Their aspirations of dominion, and sovereignty, through the Government of the Union, had become so deep-seated and real as to cause that Government, at its first step, to assume the haughtiness and imperiousness of an absolute sovereign.

“I appeal to all loyal citizens to favor, facilitate and aid this effort,” said President Lincoln, in the first proclamation, calling for seventy-five thousand men. The term “loyal” has no signification except as applied to the sovereign of an empire or kingdom.  In a republic the people are the sovereign, and the term “loyal” or its opposite can have no signification except in relation to the true sovereign.

To say, therefore, that the agent of a sovereign people, the representative of the system they have organized to conduct their common affairs, composed the real sovereign, and that loyalty or disloyalty is of signification to this sovereign alone, is not only a perversion of language, but an error, that leads straight to the perversion of all popular government and the establishment of the monarchical or consolidated form.

The Government of the United States is now the sovereign here, says President Lincoln in this proclamation, and loyalty consists in the maintenance of that sovereignty against all its foes.  The sovereignty of the people and of the several and distinct States, in his mind, was only a weakness and enthusiasm of the fathers.

The States and people thereof had become consolidated into a national Union.  “I appeal,” says President Lincoln, “to all loyal citizens to favor, facilitate and aid this effort to maintain the honor, integrity, and the existence of our national Union.”

This was the usurpation.  This lay at the foundation of the war. Every subsequent act of the Government was another step in the same direction, all tending palpably to supremacy for the Government of the United States, the subjugation of the States, and the submission of the people.

This was the adversary with whom we had to struggle, and this was the issue for which we fought.

That we dared to draw our swords to vindicate the rights and the sovereignty of the people . . . was adjudged an infamous crime, and we were denounced as “rebels.”