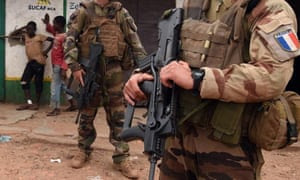 A senior United Nations aid worker has been suspended for disclosing to prosecutors an internal report on the sexual abuse of children by French peacekeeping troops in the Central African Republic.

Sources close to the case said Anders Kompass passed the document to the French authorities because of the UN’s failure to take action to stop the abuse. The report documented the sexual exploitation of children as young as nine by French troops stationed in the country as part of international peacekeeping efforts.