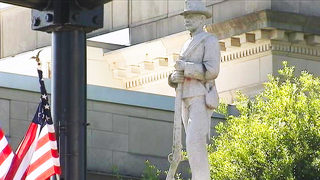 "If there's any trouble on the square, or any organization, we're not going to ask questions,” Jerry Poovey, with the Sons of the Confederacy, said earlier in the day. “We're going to lock them up. Durham will not be re-enacted here."


Thousands filed into Newton Thursday afternoon for the 128th annual Soldiers Reunion Parade.
During the parade, Channel 9 saw that one man with a gun was taken into custody. Eyewitness News reporter Dave Faherty witnessed the incident and said the man went over to some Civil War re-enactors and pepper sprayed them.

*Exactly the way they all should be handled if they break the law.
Posted by Brock Townsend at Friday, August 18, 2017