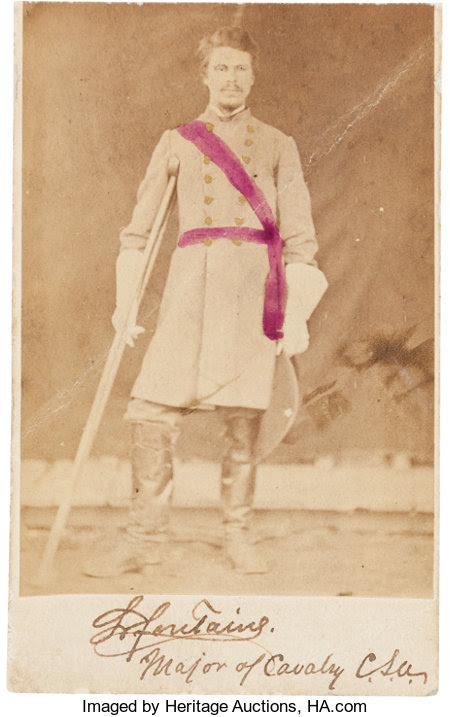 Immortal Six Hundred
Wounded multiple times during his storied career, he appears every bit the image of a gallant Confederate cavalier as he leans upon his crutch, wearing gauntlets and knee-high boots.

A wonderful relic Lot 47699 of Quantrill's Raiders and Bleeding Kansas... a great presentation sword. The reverse of the scabbard is inscribed: "Presented to Lt. Col. Porter S. Cox the officer who whipped Thrailkill and killed Bill Anderson the bandit, by his friends in St. Joseph, Mo. Nov. 25th 1864." Porter Samuel Cox, or Samuel Porter Cox as he was also known, was a Mexican War veteran who came out of retirement to lead a posse in the hunt for Bloody Bill Anderson. They tracked him down near Albany, Missouri, on October 26, 1864, and lured him into a Federal ambush where Anderson was shot through the head at the first volley. A member of Quantrill's Raiders, Jesse James, made it a point of honor to avenge the death of his comrade. On December 9, 1869, he strode into the Davies County Bank in Gallatin, Missouri, killing a man he supposed was Cox. It turned out to be an innocent employee, bank cashier Captain John W. Sheets. Cox avoided Jesse's revenge and lived until 1913.
Posted by Brock Townsend at Thursday, June 11, 2015